Providence, RI – Once again, Rhode Island’s positive numbers related to employment weren’t enough to get the Ocean State out of 47th place on the RI Center for Freedom & Prosperity‘s Jobs & Opportunity Index (JOI). However, the Freedom Factor, which gauges Rhode Islanders’ employment against reliance on welfare, did improve by one spot, to 41st.
Overall, seven of the 12 data points of the index changed for this iteration. However, data for SNAP (food stamps) has still not changed for Rhode Island since January 2017, owing to the failure of the Unified Health Infrastructure Project (UHIP) to work as advertised.
“In this month’s report, we are greatly concerned that, despite increased employment, Rhode Islanders’ personal income number is actually down by $307 million,” said the Center’s research director, Justin Katz. “That state and local taxes still managed to increase by $53 million is an additional red flag.” 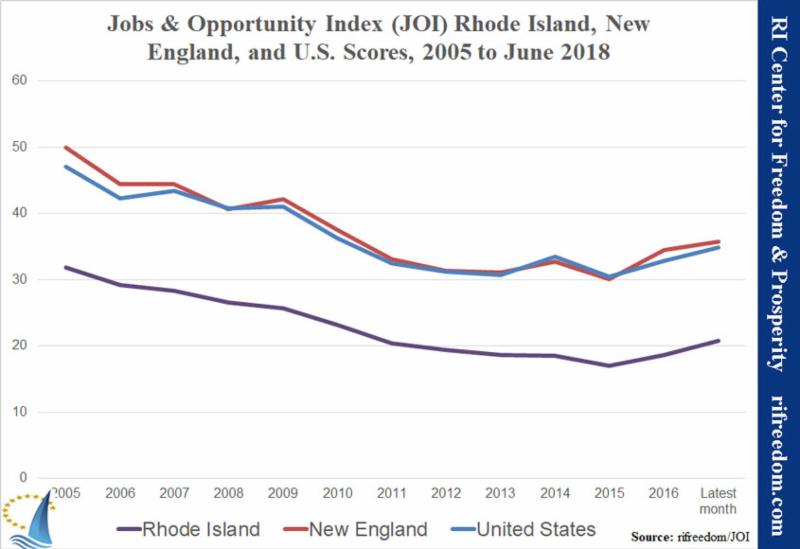 Despite an improvement in rank on the Freedom Index, Rhode Island’s JOI number lost ground against the  U.S. average and is even farther behind the average for New England.
Additional charts and details of each of JOI’s three sub-factors can be  viewed here.
https://rifreedom.org/wp-content/uploads/NE-JOIrace-0618.jpg 580 845 RI Center for Freedom https://rifreedom.org/wp-content/uploads/logo_sail_300x100.png RI Center for Freedom2018-07-24 17:37:002018-07-24 17:37:00Media Release: Jobs & Opportunity Index June 2018
0 replies

Center Warns of Litigation in Effort to Unionize Home Care Professionals
Scroll to top
Help us make our Ocean State a better place to call home!DONATE TODAY!
GET CONNECTED